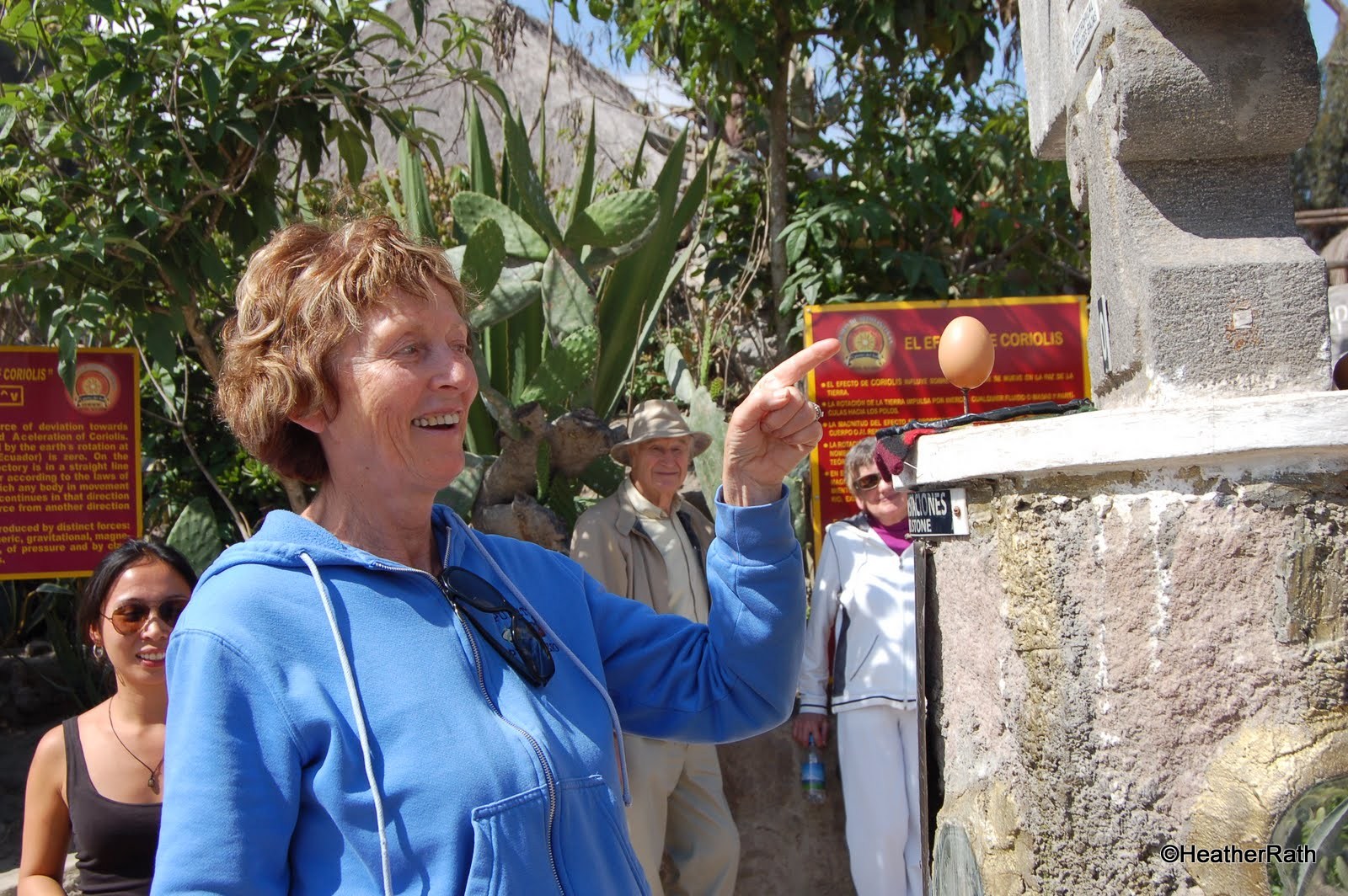 She did it - the only one in our group of five to do so!

Ecuador and the Equator

The equator runs through hundreds of places worldwide.

But in Ecuador, this South American country proudly celebrates the fact it sits on the equator. Indeed, the Republic of Ecuador literally translates to “Republic of the Equator”.

Quito, its capital city, lies right in the middle of the imaginary line.

La Comdamine spent ten years in Ecuador taking measurements. He proved the world is not perfectly round, but bulges at the equator.

Official recognition of the Equator

Ecuador built a monument in 1936 to commemorate the 200th anniversary of that first expedition.

Years later, in 1979, the country replaced this original monument with a 30-metre-tall tower topped by a five-foot-wide globe.

This new monument sits inside a park called Mitad del Mundo (Middle of the World).

A thick yellow line runs along the ground from the monument. This line supposedly marks the precise position of the equator.

But is it the true equator?

A modern GPS measurement shows the actual equator lies about 240 meters to the north of the indicated line.

Park officials explain that a ravine traverses the nearby land where the actual Equator is located. And that ground is/was not suitable to hold a monument.

This is why builders chose the existing site.

Hype around the Equator

Which brings us to our visit.

No problem. If you disregard the controversy regarding which is the true equator!

Balancing an egg on the equator

What’s this all about?

During the spring and fall equinoxes, the sun appears directly overhead at the Equator. The length of night and day are nearly equal worldwide.

Some people believe the gravitational pull of the sun on these days helps keep an egg standing on its end.

For fun, we tested this theory.

Legend has it that on the spring equinox, you can balance an egg in an upright position thanks to the Earth’s position relative to the sun.

Presumably, one will have more luck if using an egg with a yolk centered in the shell.

Really, though, this egg-balancing trick is only a fun fable.

There is no gravitational change during the equinox that will help balance an egg.

Standing an egg on its end is something just about anyone can do any day of the year. The feat simply takes the right egg, a little practice, and much patience.

So, is my egg balancing phenomenon on the equator in Ecuador a lucky feat?

Or is there some mystical connection to the pull of gravity on the equator?

High in the mountains of Ecuador outside Quito, the equator comes to mind once more.

This volcano straddles the equator and is the highest point on the equator.

For more information about Covid for Ecuador click here

Where to Stay in Quito

We stayed in Hotel San Francisco de Quito. It was well located in Centro Historico, not far from the Presidential Palace. Currently rooms are $73 USD/night

Where to Eat in Quito

There are many choices of cuisine and for all budgets. One dish not to be missed is roasted Cuy (Guinea Pig). A selection of local restaurants can be found here.

See our other blogs from Ecuador

Eco Etiquette in the Galápagos

How to Buy the Perfect Panama Hat