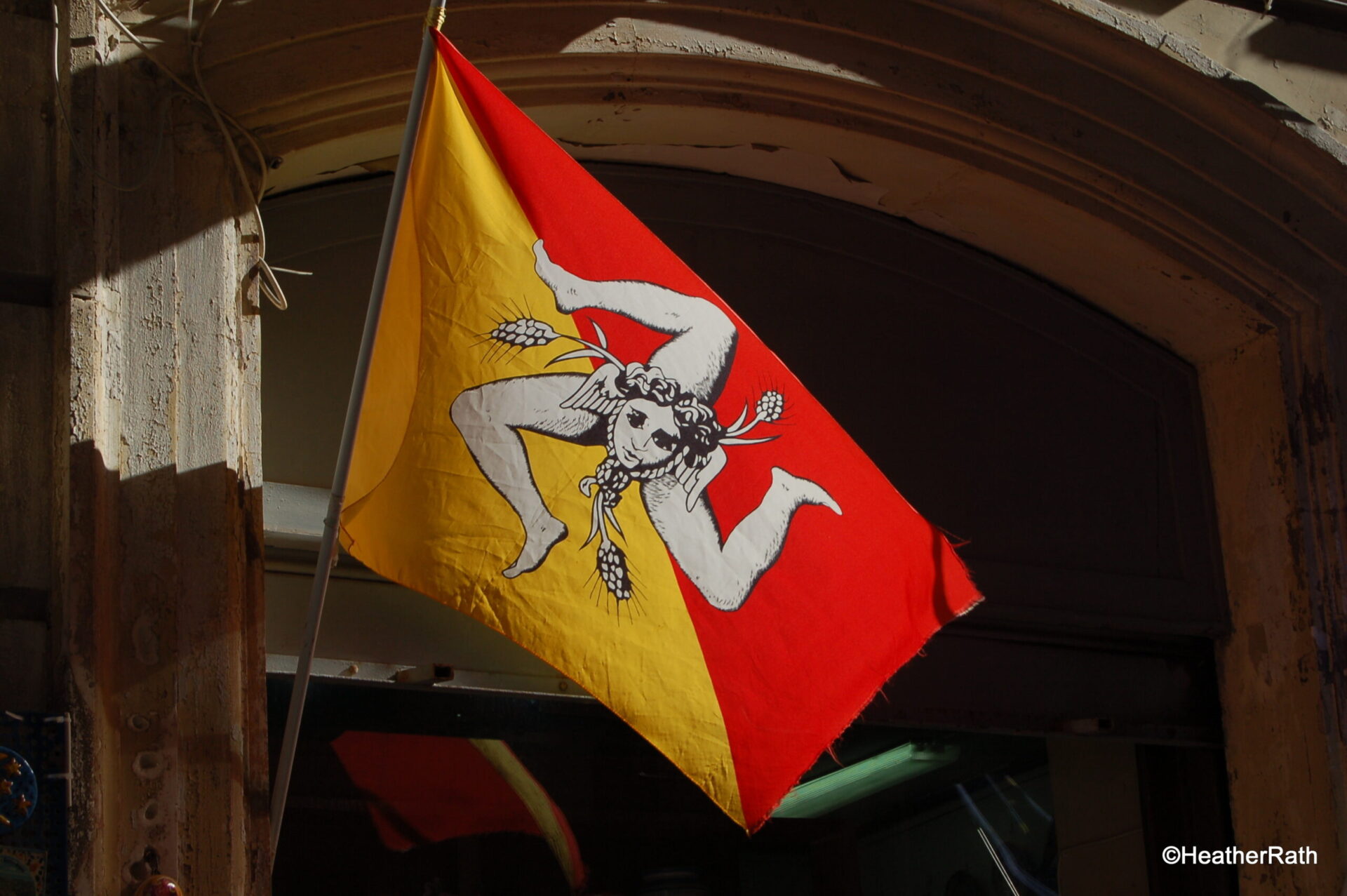 The Sicilian Flag - The 3 legs form a triangle or 'tinacria' from the Greek name for Sicily 'Trinakrius' because of its triangular geography. The face in the middle was originally Medusa but has been softened somewhat. It was created in 1282 but not officially approved until 2000. The colours are from the 2 founding cities, Palermo (now the capital) and Corleone. Sicily is a 20 minute flight from Malta so we decided to spend a few days there.

For the ancient Greeks in Siracusa, under siege from the Romans, fleeing the city to take refuge on the nearby island of Ortigia was the only option.

On this slip of land, a mere 1.7 km away, lay a secret well that exists today.

UNESCO recognized the heritage value of Siracusa in 2005.

In Magna Graecia — the part of southern Italy colonized by the Greeks from the 7th to 3rd centuries BCE — Siracusa was the most important Greek city. 300,000 people lived there at that time. Today the number is 122,000.

The Greek theatre in Siracusa dates from 5th century BCE. It is the largest in Italy, second largest anywhere. While it seated an audience of 16,000, a comparable theatre in Epidaurus, Greece, seated 20,000.

Acoustics from the ‘Ear of Dionysis’, a cavernous rock channel within the Greek theatre, can be heard from a distance of 65 m to the stage.

Voices of the speakers/performers near the ‘Ear’ are magnified 16 times.

Legend says the tyrant Dionysus used the channel as a jail since he could easily eavesdrop on prisoners’ conversations.

When the Romans defeated the Greeks in the 2nd century BCE, they took over the theatre.

The Siracusa ‘amphitheatre ‘ gets its name because it is doubled with two halves rather than a single theatre. Originally Greek, the theatre was ‘doubled’ by the Romans in 211 BCE.

The Greeks used their theatres for lectures, speeches, and concerts.

The Romans, however, used their theatres for sports and spectacles (slaves fighting ferocious animals, executions…).

The name means quail in ancient Greek. Ortigia (aka Ortygia) is a fortified city with a fascinating  history and remarkable architecture.

One Greek legend records the goddess Leto stopped here to give birth to Artemis and Apollo.

The Duomo of Ortigia sits on the site of the oldest church in Europe. It dominates one of the most beautiful central squares in Italy. This magnificent structure has been a church, a mosque, and then a church again.

It maintains its baroque Doric columns, still visible inside and out.

Piazza Duomo, the beautiful and the ugly

Ortigia’s Piazza Duomo is the second most beautiful piazza (next to St. Peter’s) in Italy.

But watch for fearsome figures of fantastic designs that highlight grotesque elements of the period. These ugly faces were created to frighten the devil.

At the back of the square, opposite the Duomo, lies the Church of Santa Lucia alla Badia. Once a mosque in 878, the church was damaged during the earthquake of 1693.

The facade was later rebuilt.

The church houses treasured Byzantine, Norman and Spanish paintings including a masterpiece by Caravaggio, controversial and influential Italian artist.

Masterpiece, “The Burial of Saint Lucy”

The Burial of Saint Lucia, by Caravaggio, is found in the Church of Santa Lucia alla Badia. While living in Sicily, the artist painted this famous scene showing the martyrdom of Saint Lucia, patron saint of Siracusa.

When Siracusa was attacked by the Romans in 212 BCE, many inhabitants fled to the nearby island of Ortigia.

They survived the assault because of a well of fresh water originating in the underground stream from the Greek theatre at Siracusa over 6km away.

The well functions today as the Fountain of Arethusa.

The name originates in Greek mythology. This is the place where the nymph Arethusa, patron figure of ancient Siracusa, returned to Earth’s surface after escaping from her undersea home in Arcadia.

A continuing side effect: the spring water feeds the original Papyrus trees still thriving in the well.

Click here for Covid information for travellers to Italy

Sights and Sounds of Sicily

There are flights from Rome as well as many European cities. From Rome, take Alitalia to Catania. The flying time is 1 hr 15min; cost 60 euros and up.

We stayed in Catania to better explore eastern Sicily. We hired a car and driver to go to Siracusa. It was about 1 hour south of Catania. We stayed at Hotel Etnea 316. Very clean, well located and moderately priced. Tip – we ate several times at the nearby Trattoria Don Mimmo , a favourite of locals.

Read our Other Blogs from Italy

Casanova and the Bridge of Sighs